Bonjour mes amis!!! And for those of you dolls who aren’t fluent in Francais that means hello friends! This past weekend I had the pleasure of visiting Montréal. Somehow I had never been to this fabulous city despite it only being a mere 6 hour drive away. We were thrilled when one of our favorite couples asked us to go away Labor Day weekend with them for a little sightseeing and A LOT of eating! We quickly decided to stay at the Fairmont Queen Elizabeth, as in my opinion the Fairmont is an extremely reliable hotel chain and I didn’t feel like doing research. Plus, you can always bet that the Fairmont will be right in the heart of the action. The Fairmont Queen Elizabeth was no different, it was located right in the vivacious heart of Montréal.

Upon check-in I was pleased (yet not surprised) that the Fairmont Queen Elizabeth was so centrally located and within a short walking distance of (what soon became) many of our favorite parts of town. It was also a very short walk to many of the cultural and sports attraction. I was also interested to learn that the Fairmont Queen Elizabeth is located right above the train station (so convenient for tourists). The hotel is also connected to an intricate underground world with thousands of boutiques, restaurants and cafés. Montréal (so I’m told) gets pretty cold in the winter so this seems so ingenious! I wish NYC would build something similar so I could still shop in sub-zero temperatures!

I was psyched to learn that besides myself, the Fairmont Queen Elizabeth has housed quite a dignified clientele including Prince Charles, General Charles de Gaulle, Nelson Mandela, and even the Dalai Lama. Equally as exciting was the hotel’s historical celeb clientele, which boasts classic movers and shakers like John Travolta and John Lennon. In fact, John Lennon held his famous ‘bed-in’ in 1969 in Suite 1742, where the song “Give Peace a Chance” was written and recorded! Being such a crazy Beatles fan, this really did it for me! If a hotel is good enough for John Lennon, it’s good enough for me! 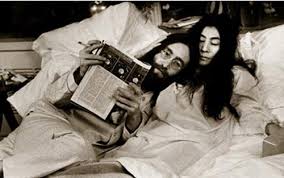 The hotel itself is ginormicous (translation=hugungous). There are 1,037 rooms and if they were anything like my junior suite they were extremely luxurious. The charm of this hotel in my opinion is that the rooms really reflected the city’s distinct elegance and style.

Each room and suites at Fairmont The Queen Elizabeth offer the following amenities:

The beds were super comfortable and I loved the turn-down service each evening. I especially appreciated the two bottles of water they left for these two kiddos who definitely needed to rehydrate when they got back. The room was quiet as could be, I didn’t hear a thing and slept comfortably through each night.

I must tell you that there are a few parts of the hotel that felt a little dated. The technology is a little behind us in the USA. The TVs are not flatscreens, which many of you have probably come to expect in luxury hotels. This isn’t something I minded at all given that I spent very little time in the room other than for sleeping. In fact the only time I even turned on the TV was when our friends ditched us go get engaged! (Wahoo!!) I chose to watch Legally Blonde in French and brush up on my language skills! Other than the televisions everything in the hotel was extremely high-quality. Especially the bathrooms—both of them! Probably my favorite part about our Junior Suite was having two bathrooms. What a luxury for a couple from NYC whose bathroom is the size of a shoebox. The bathrooms were marble and the amenities as always were impressive. I particularly enjoy how the Fairmont hotels give you Scope mouthwash, cotton swabs, cotton balls, a nail file and a shower cap. It’s the little things at this property that make you realize you’re at a truly fine hotel.

Word to my fellow internet-nerds, if you’re planning on wanting to surf the net during down time be sure to join the President’s club as it entitles you to free internet access, which is about $16/day otherwise!

The only other thing I have to say about the hotel that isn’t a glowing recommendation is that the hotel has a heavy business clientele feeling. For me I happen to associate this with quality but there is a large conference attendee population at the hotel that you may wish to be aware of.

The hotel is also home to three restaurants (I didn’t have the chance to try them unfortunately as our friends had us scheduled pretty tight) Les Voyageurs Bar, Le Montréalais Bistrot-Bar and the award-winning Beaver Club, which are all recognized among Canada’s best restaurants.

To make a reservation or find out more information about the Fairmont Queen Elizabeth visit the Fairmont Website or call toll free at (866) 540-4483. 900 Rene Levesque Blvd.W. Montreal, Quebec Canada H3B4A5.

Our friend, let’s call her Baguette for the sake of her anonymity, made the best itinerary for our trip, filled with delicious French restaurants, cafes and bars. Here are the must see places in my opinion. For dinner our first night we went to a restaurant called Lemeac. They have a fantastic late night menu after 10PM. You get an appetizer and an entree like Steak Frites or Short Rib or Duck for $25! And this is no cheap restaurant so this is a bargain! For brunch the next day we went to a restaurant called Le Cartet, which served the most gorgeous brunch specialties in a casual cafe setting. We each ordered the same thing, the Super Salmon Breakfast it came with a salmon/sweet potato cake, salmon scrambled eggs and a half of a smoked salmon bagel for all this, coffee and a mimosa it was only $20! Not bad, right? Delish!

Here are some pictures of us out and about before I give you more food suggestions.

This was at our favorite bar, Barmacie. Instead of having to return time and time again for your cocktails they give you a bottle with mixers for a reasonable price and let you mix them yourself. Such a treat! Then there are ledges around the bar where you can rest your tray and become your own bartender!

Perhaps my favorite French cafe was Cafe Figaro. The interior was just gorgeous and the croissants were out of this world! Tres bonne!!!!!! Very low key and authentic. Love, love, loved this place! Probably one of my favorite destinations we visited.

Just a random patisserie I thought was beautiful.

For the big celebratory engagement dinner, (Wooo!) we went to a restaurant called L’originale.

The food here was outstanding. The true standouts were the tuna tartare, truffle salad (unlike anything you’ve ever tasted. I think they put crack in it!) and the scallops. Truly some of the best food I’ve ever had. Now, if you want a great and truly Montreal-ish (is that a word?) beverage you have to try a Bloody Ceasar!

It typically contains vodka, Clamato (a blend of tomato juice and clam broth), hot sauce and Worcestershire sauce, and is served with ice in a large, celery salt-rimmed glass, typically garnished with a stalk of celery and wedge of lime. And if you’re luck you can get it with some fresh seafood!

We also ate at an adorable cafe called Au Festin de Babette. It offers gourmet delicacies, imported goods, decadent chocolates and a tea salon in which to unwind and savor them.   It had fantastic crepes and such an adorable ambiance. It’s definitely a must see when you’re shopping to fuel up.

For breakfast we went to a restaurant called Grande Mere Poule. It was incredible! The brunch was honestly the best I ever had. The eggs Benedicts were especially amazing. The waffles weren’t the best. That’s my only comment that isn’t positive! The bacon, baguettes, banana bread and potatoes were all great!

Congrats to our friends, Baguette and Pamplemousse!! We had the best vacation ever. I would highly highly recommend the Fairmont Queen Elizabeth and a visit to Montréal in general!

Au Revoir!!! I’ll leave you with our most favorite French (I clearly use that loosely) video.

*We were given a special press rate in consideration for reviewing the property for our fabulous readers. As always all opinions herein are completely my own!*

Interested in visiting Montreal? Not sure where to stay? Check out our review of the Ritz-Carlton Montreal too!