A few weeks ago we made reservations on a Friday night at this joint. Now, let me preface this review with the fact that the food was NOT great so I won’t waste my time regailing you with why. It wasn’t bad, but it wasn’t good. So I recommend this restaurant for drinks and the show!  You can hit it up around 11 and sit at the bar and easily see the show. Or they have a late nite menu which you could come and get snacks from.

THE SHOW is where it’s at! It’s restaurants like these that make me love NYC! I mean, seriously where can you find a burlesque show with a fantastic 3 piece band anywhere else? It’s a wonder to me that this place wasn’t booked up for months! Its very classy and very 1920s! Or what I would guess 1920’s to have been like! The crowd was interesting so it made for good people watching. The woman next to us was in her 60s with 6 stunningly gorgeous men. We spent a good portion of the meal trying to decide if she was famous since she was wearing sunglasses and an oversized hat.

Brian Newman (the vocalist) was fantastic. Brian is a trumpet player and singer originally from Cleveland, Ohio. (Which we found out when we grabbed him to shower him with our compliments). After finishing at Cincinnati Conservatory of Music, music led him to New York City and this is where he belongs. Performing a medley of genres with some of the most talented performers in the city, he has been called “brilliant” by Stephen Holden of the New York Times and as a band leader and a sideman, he continues to perform throughout NYC and abroad adding his personal and stylistic touch to every single note. He’s a great singer and dazzles the crowd with old favorites by superstars like Sinatra but also with old classics you never knew you’d love.

He’s also a great emcee y’all, introducing the fantabulous chickies! They were jaw-droppingly hot and so loveable (gosh I’m such a girl to say that about a half naked woman). The girls switch each week to keep the show fresh. And I apologize for not remembering names (their drinks were strong, man!) but one did a tap-dance tease and the other sang and did a strip-tease. They were both amazing. Drinks run for somewhere between overpriced and Manhattan is ridiculous but hey, you are going to spend at least $10 for a martini in NYC, you may as well get a glorious show with it, no? 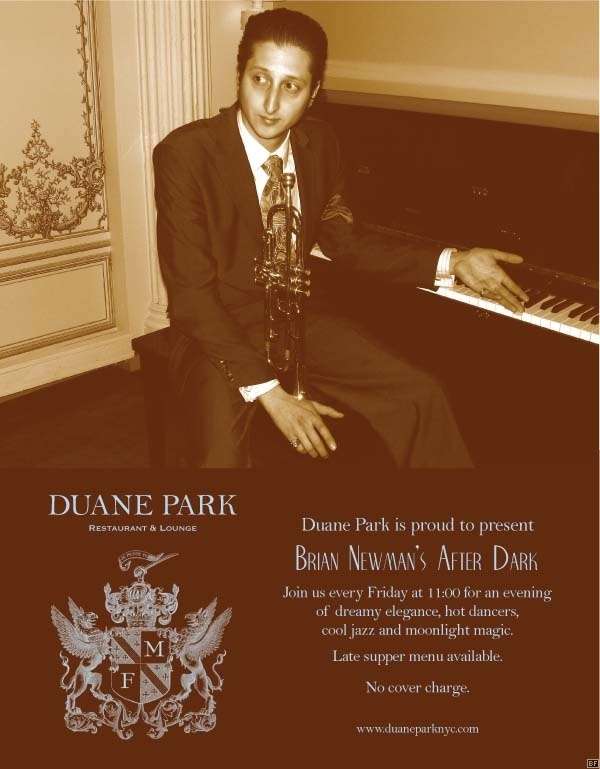 Brian also plays at CORIO. Haven’t been yet but we definitely have put it on our to-do list!

Visit Duane Park Cafe in Tribeca while you can still get a reservation!