Last night I was invited to the restaurant opening of Pergola, a new spot in the Flatiron District. I had no idea what to expect but I must say–I was pleasantly surprised by what I found–and I do mean surprised. I expected to find your run-of-the-mill Mediterranean eatery, thought I’d have some hummus and be on my way–but Pergola is part dining experience, part hookah bar and part sexy lounge with amazing (and I emphasize amazing) music. They played upbeat techno versions of everything from Whitney Houston and Adele to Nirvana and Led Zeppelin. It really is a fun environment for a night out in New York City. You can even smoke a hookah! It reminded me of a classier version of Le Souk in the East Village, if you’ve been. It’s a 3,700 square-foot restaurant in all. Its expansive glass exterior lets in natural light and there are wonderful green plant accents throughout, paying homage to the venue’s past when it functioned as a flower shop.

The bar was extremely sophisticated–but then how could it not be with a signature cocktail list created by Scott Fitzgerald (formerly of Mulberry Project). The cocktails were innovative and delicious. I tried the Lavender-Lime Collins (gin with lime juice, Luxardo maraschino and lavender-violet liqueur topped with soda and a mint bushel of thyme). I was blown away by this fragrant and perfectly balanced concoction that happily wasn’t overpoweringly sweet (quite a feat!). Next time I go I’m definitely checking out the Jalisco Rose (Reposado Tequila shaken with amber agave, apples, rosemary and lime juice), and the Spearmint 75 (vodka with lemon, torn spearmint, agave, lemon rind and a splash of Prosecco). 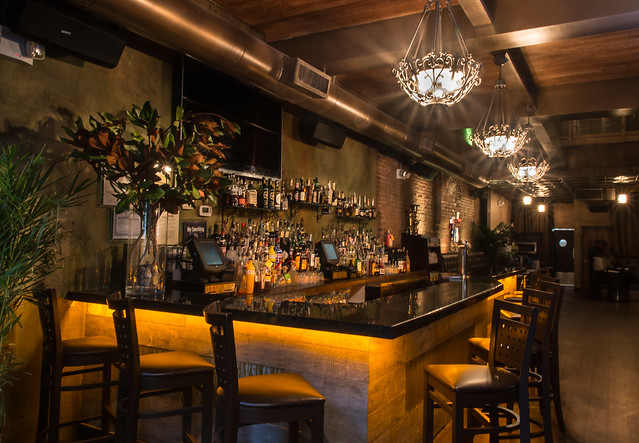 The food was delectable. The Ecuadorian-born chef, Nestor Moina, serves up a Mediterranean menu with influences from Greece, Turkey and across the Middle East. We sampled the Hummus and Tzatziki small plates, which were great takes on classic Mediterranean staples. The pita served alongside was incredible and the spicy fried pitas that came with these yummy dips were even better! For entrees we ordered the Falafel-crusted WILD salmon (God I love it when restaurants splurge and go the organic, healthy route) and the Grilled Prawns (with tomato ouzo sauce, yellow polenta and spinach). 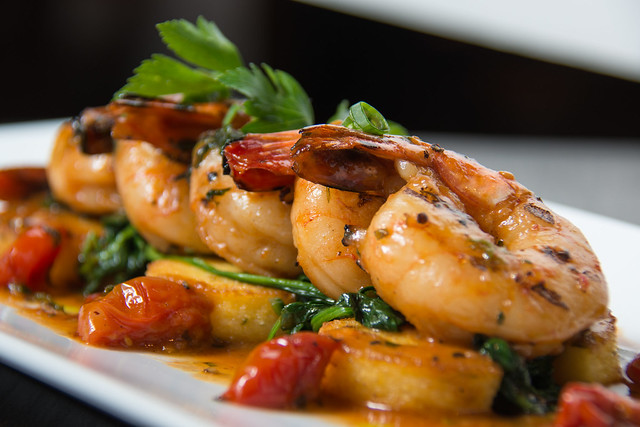 Both of these dishes were outstanding. My husband doesn’t even like salmon and he gobbled down his half in just a few bites. The polenta on the prawn dish was amazing too, as was its tangy sauce. Portions were large but we still had room for the donuts. While these were delicious they had a bit too much sauce on them in my opinion, leaving them a little soggy.

I had a great time and I think this is a fantastic restaurant to take friends, family and even large groups as this space is so massive. Come. Eat. Drink. Be Merry. And Smoke a Hookah! It’s actually a 3,700 square-foot restaurant in all. Its expansive glass exterior lets in natural light and there are wonderful green plant accents throughout, paying homage to the venue’s past when it functioned as a flower shop. 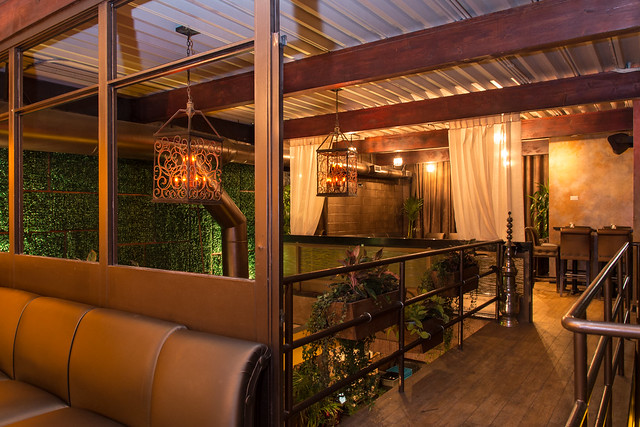 HOURS/DAYS OF OPERATION: 7 nights a week, 5PM ­ 2AM with lunch and brunch service launching in late January.

Open 7 nights a week, 5pm-2am with lunch and brunch launching in late January.
Complimentary WiFi and Free Delivery will be offered.