Home > London > A Luxe Stay to London: A Guide to the Best Things to Do and See: James Bond Edition

When I was a little girl I would invite friends over for play dates just like everyone else. But instead of putting on the typical movies like Thumbelina or The Little Mermaid I would pop in my dad’s copy of James Bond’s Goldfinger. My friends would cry until I turned it off (we were only 8 after all) but I just couldn’t get enough. I’ve dreamt of being a Bond girl from the moment I saw my first James Bond film (seems irrational since most of them die horrific deaths but try and look beyond that). The glamour, the danger, the chance to smooch Sean Connery (my fave Bond). So when I think of London of course I can’t help but think of everyone’s favorite spy, 007. I am fresh off a fabulous trip where I was invited to experience London courtesy of Visit Britain (yep, they flew me out there so I could share all its fabulousness with you guys! Cheers to that, right!?).

While I have done stories about the best things to do in London, that list was more relevant for typical tourists. If you’re looking to experience London like a baller then I’ve got the perfect itinerary for you–London James Bond Style! Here are my recommendations for what to do in London that even James Bond himself would approve of.

Doing Reconnaissance on Your Surroundings

I always say the best way to get to know a city is by taking a walking tour. Our first official activity of my trip was to take a tour of different film locations around London with Brit Movie Tours. Our guide was super knowledgeable about London and every TV show or movie that had ever been filmed there. And there are plenty of tours to choose from, including a James Bond themed walking tour (approximately 2.5 hours). You can explore locations from several of the Bond films from Skyfall to Goldfinger. They’ll also take you to check out some of the movie props and even a few other surprise extras.

Some iconic London Locales featured in Bond Movies that you must be sure to see: 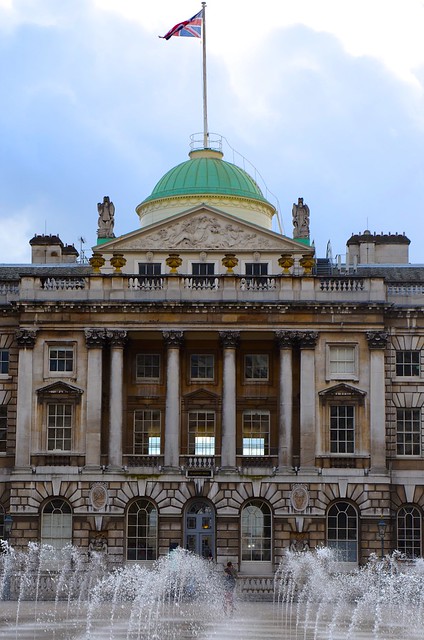 The courtyard of Somerset House is used to portray the Ministry of Defense in Tomorrow Never Dies and as a public square in St. Petersburg in Goldeneye. 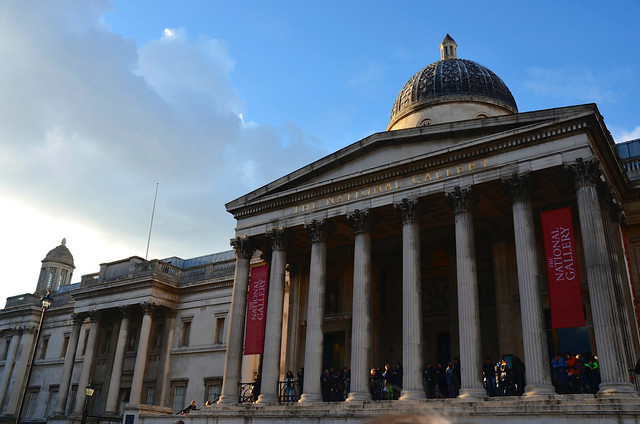 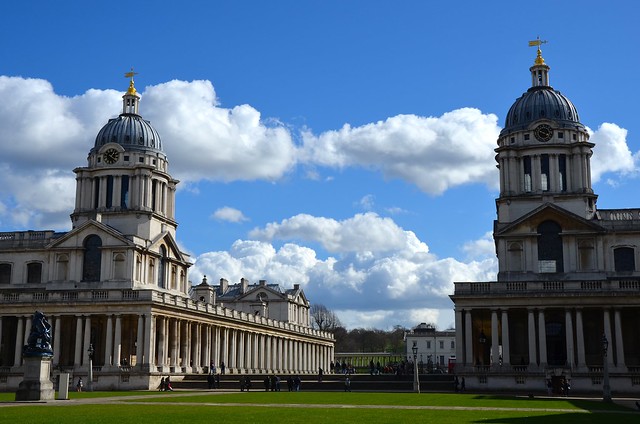 Not only did this iconic location appear in James Bond films like Skyfall, it has also appeared in Thor: The Dark World, The Dark Knight Rises, Pirates of the Caribbean: on Stranger Tides and Sherlock Holmes.

Head down to the River Thames and go for a thrilling boat ride on an RIB boat. It’s the most fun way to travel in London. Head down to Millennium Pier by the London Eye where you’ll board a chartered boat that will take you down to Greenwich in style.  It was definitely one of the best activities we did our entire trip! They play awesome music as you zoom down the river full speed ahead! We kicked off with some “Girls Just Wanna Have Fun” and once we were really cruising they put on some James Bond. There was a lot of “Woooooo Hoo-ing” on this boat ride as you can see in this little video clip. It’s not too crazy though–nothing dangerous–I think that everyone from kids to older adults could enjoy this. I sure know we did! We didn’t stop talking about how fun this was for the whole week. True Story. For more information visit RIB Ride on the Thames. 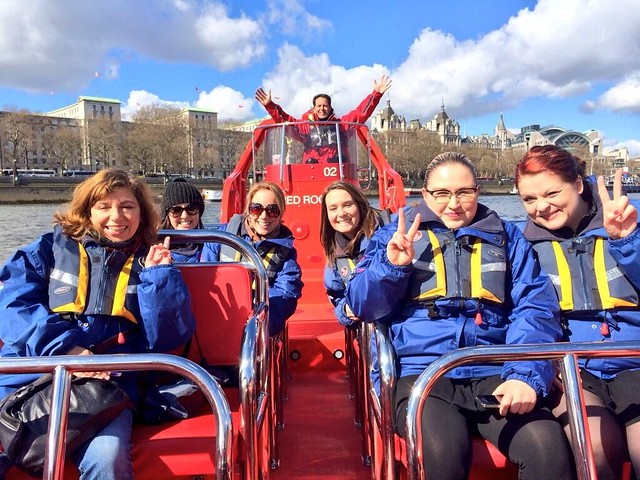 Up, Up and Away

Remember the opening sequence in The World is Not Enough? A speedboat chase followed by James Bond getting lifted up into the air by a hot air balloon, which then is blown up, he drops down and ends up hanging off of the former Millennium Dome (now called the O2)? Quite a memorable sequence indeed! Well, these days you can climb this iconic arena and have your own Bond-esque experience. All you have to do is sign your life away on the dotted line–No Big Deal. The folks over at O2 will get you suited up with your protective suit and harness so you’re ready to take an uplifting expedition across the roof. The outfit is slightly less glamorous than your average Bond girl attire but hey, I’m a modern woman, I can make anything sexy, no? 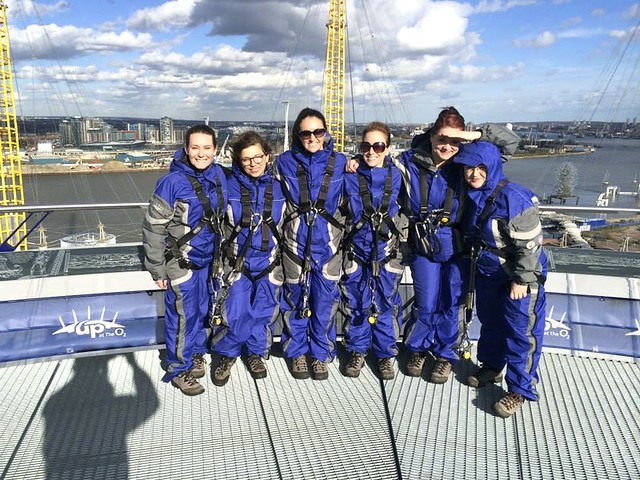 The entire experience takes about an hour and a half. When you reach its summit you’ll enjoy spectacular 365-degree views of the city–and I do mean spectacular. The air feels different up there and you get a rush of accomplishment (or maybe it’s adrenaline). Plus, it’s a good way to burn off some of the many calories you’re sure to be ingesting in this undercover foodie paradise. Not sure where London got its bad rep–but I digress. When you’ve had your fill of fresh (read:windy) air, you’ll finish with a thrilling descent back to base. They allow you to bring your phone up (no cameras) only items that can fit into a small pocket on your sleeve. I suspect dropping something from such heights would not be a good thing! While the climb is somewhat rigorous, I expect that most people will be able to handle it if they are in good health. It’s about a 30 degree incline I’m told. Take that for what it’s worth. This was another group favorite. I was quite surprised that I liked this activity as much as I did. The views totally make it worth your effort! For more information visit Up at the O2 Experience online.

No one can rightfully call themselves a James Bond aficionado without learning how to pour the perfect martini. And what better way to end an afternoon? We headed over to Bar Americain’s Martini Master class. It’s an elegant 1930s-style bar located in the heart of Piccadilly. It’s actually a classic American bar that features authentic Art Deco surroundings–definitely somewhere you’d find James Bond back in the day. Time Out London called it “one of the most opulent bars in London” and who am I to disagree? Our professor for the day taught us all about how to properly mix the ice so that you end up with the perfect film of thin ice on the top–but then I drank the martinis and I’ve forgotten. I have learned though that after several martini tastings that I do a fabulous James Bond impression. The hotel is gorgeous and I would definitely return here for a show at The Crazy Coqs, an intimate cabaret theater just down the hall! 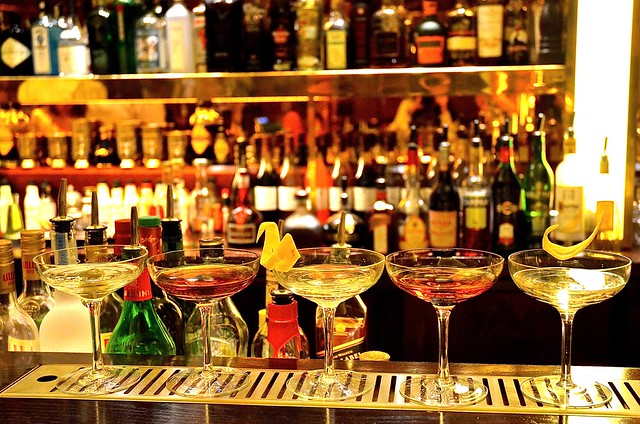 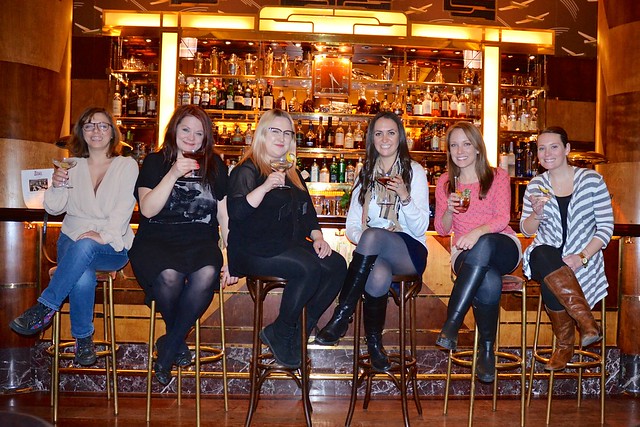 If you’re looking for the original James Bond bar, you’ll have to head to Dukes Bar at Dukes London hotel in St. James Place, Mayfair. While it hasn’t been confirmed, it’s rumored that a barman at Dukes Bar inspired Ian Fleming’s iconic “shaken not stirred” phrase. The author frequented this spot regularly so it’s highly bloody likely (been dying to use that phrase). It’s a really cool spot and worthy of a visit.

James Bond pretty much invented the high-speed chase. Check out The London Film Museum and view the largest official collection of James Bond vehicles. The exhibit is fantastic, vehicles are collected and many feature film reels with sequences in which the cars appear. You’ll find everything from the Rolls Royce Phantom II in Goldfinger to the Octopussy Jet to the Diamonds are Forever Bath-O-Sub to the Golden Eye Aston Martin. There’s a fab little gift shop and you can also get suited up like James Bond himself and get a souvenir photograph. The day we visited it was also Aston Martin day in Convent Gardens. It was really awesome–and I’m not even a car buff. The event attracted quite the lot of wealthy car owners. I was blown away when I got to see all the Aston Martins plus a McLaren (okay truth be told I had no idea what it was but my friend clued me in). For more information visit Bond in Motion at the London Film Museum. 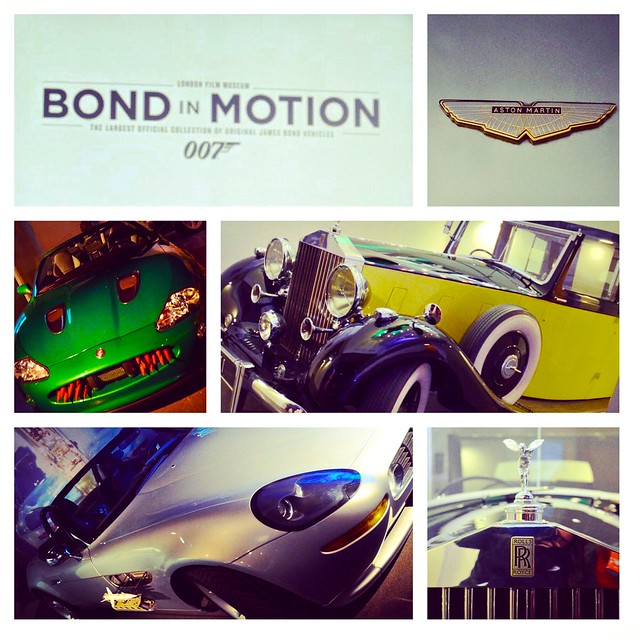 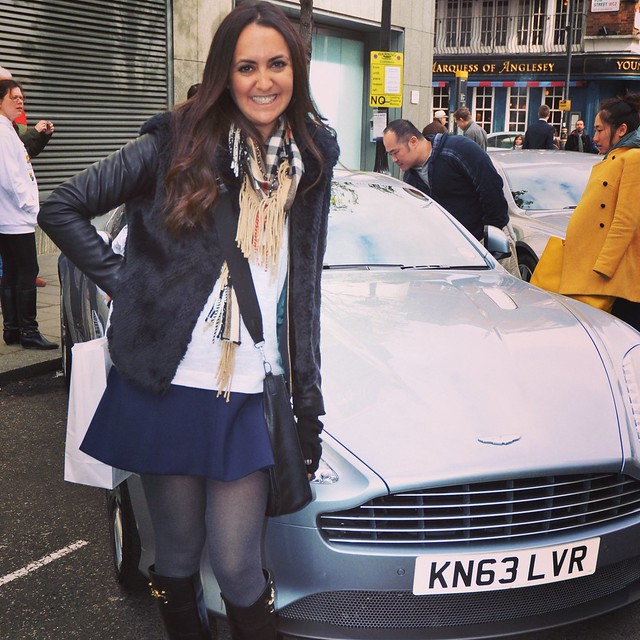 James Bond always dresses to kill. I love picking up new threads on vacation because, well I have a shopping problem. But I figure at least it’s useful rather than purchasing crap at the airport (though truth be told I do that too). If you want to pick up a sharp shirt for yourself or your man check out Turbull and Asser, who has made shirts for every Bond actor. They also make fabulous pajamas–just ask dame, Judy Dench who snoozes in this fab luxury nightwear. And if it’s snazzy footwear you’re after, be sure to check out John Lobb. They don’t produce your average pair of shoes–each pair is custom made and takes over six months to complete! Esquire magazine described this store as the most beautiful shop in the world, so even if you can’t afford a pair, it’s a unique stop. You never know who you’ll find here–gliteratti, kings, maharajahs, actors and singers have all been among the clientele. 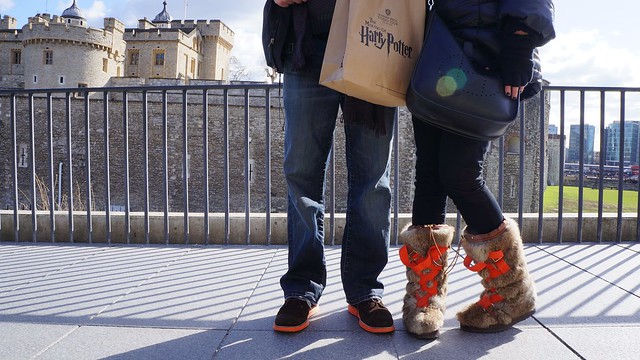 My trip (as mentioned above) was sponsored by Visit Britain. As always, all opinions herein are my own. I truly love London and you can check out previous articles (from non-sponsored trips last year!)

A special thanks to all my Bond Girls for making the experience so special! If you want to check out our wacky (sometimes geeky) conversations and trip on Twitter and Instagram check out the #BondGirls hashtag. Love you Melissa, Rachelle, Kelly, Essi & Tiia.