Home > Crete & Greece > A Luxe Visit to Greece–Even with Kids! Find Out Where to Go in Crete!

For those of you who know me, you know that I don’t have children yet. One thing that has caused some of the delay, you might say, is my love for travel. Once you have a baby there are inevitably certain destinations that have to wait until either the kids are older or out of the house. Sigh. That’s why when I connected with my girls over at KidsLoveGreece.com, I was excited to learn that this doesn’t necessarily have to be the case–and that maybe you can have it all! They specialize in family travel to Greece so I checked in with them to see where they think the most family-friendly, luxury destination is to visit–Crete! Turns out it’s somewhere I’ve been, very briefly but I do happen to agree. So here’s what they had to say about luxe family travel in Greece!

For decades Greece has been synonymous with the 3 S’s which are sand, sea and sun. Not one of these even has a price tag!   There is little wonder that Greece has traditionally been associated with low/ middle class tourism. However, this is definitely a myth these days and is exemplified by the growing number of luxury hotels and villas which have been developed over recent years.

If you want to spend your holidays in luxury we would recommend the island of Santorini without hesitation. Majestic scenery and amazing sunsets make Santorini one of the most magical islands in the world where you can’t separate the blue of the sky from the blue of the sea.  The hotels and the villas know how to pamper to the needs of the rich and famous … a member of a certain shipping magnate family springs to mind!

Unfortunately, however, Santorini is not really the ideal place to take children on holiday as it lacks children’s amenities and their boredom could easily overshadow the enjoyment of your holiday BUT that is not to say that you can’t find the luxury you desire and at the same time fulfill your children’s holiday dreams. This is still very achievable and we believe we have found the perfect alternative to Santorini, and that is none other than Elounda in eastern Crete. For those of you that have not been to Greece before, Crete is the biggest island of the Greek islands and also the most southerly. It is an island blessed by God as it has so much to offer.  There is the wonderful healthy Cretan cuisine, the endless sandy beaches, the mild weather which lasts until the middle of autumn giving Crete the longest summer in Greece, a rich culture which is steeped in history and tradition, the very diverse scenery, the characteristic villages, the plentiful monuments, the water parks and children’s parks, the numerous gorges for walking, and let us not forget the warm hospitable people. The list goes on and with so much to see and do for all ages it is little wonder that Crete is such a popular family holiday destination.

With luxury in mind, Elounda and lavishness go together. The views in from Elounda are really stunning and it is rich in 5 star luxury and deluxe accommodation which will pamper all your family needs.  Even though it will be hard to leave the comforts of the hotel it would be a pity not to get out and about and see some of the wonderful sights of Crete, many of which are close by, and some are a bit further afield.

First of all, a visit to the archeological site of Knossos is an absolute ‘must’ for any visitor to Crete. This Minoan Palace has a history dating back 4000 years and your children will love the myths – the story of Theseus and the Minotaur is to name but one.  Spend a morning visiting the site and give them a cultural stepping stone for the future and one of the most educational experiences of their life with the audio guide of ‘KidsLoveGreece for Knossos’ (soon to be launched). 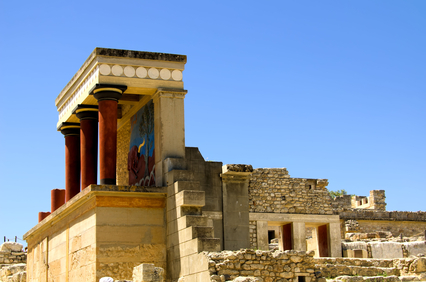 Try to combine the visit to Knossos with the show of ‘Minoiki Avli’ (‘Minoan Court’) which takes place every Saturday within the walls of the Riding (Ippikos) Academy. The show focuses on Minoan religious rituals and ceremonies and it feels like the actors have literally stepped out of frescoes. The show will introduce you to the magnificence of Minoan culture – a really unbelievable experience for both young and older visitors every Saturday at 16:30 in the afternoon.

Recently opened is the Labyrinth Park in Hersonissos. This will raise the adrenaline levels and at the same time provide entertainment and carefree play for your children. There are many activities but the main attraction is the Labyrinth where the idea is to find the Minotaur hidden in the middle of the maze by following clues and then escape from him! 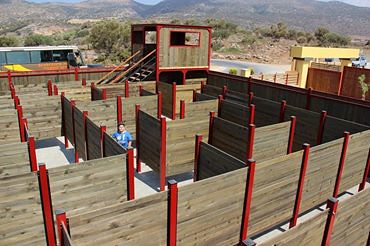 Don’t forget about CretAquarium where you can see many species of Mediterranean sea life.

If at some point you want a day out somewhere which is very local and totally unspoiled then try the beach of Kolokitha which is not too far away from Elounda. 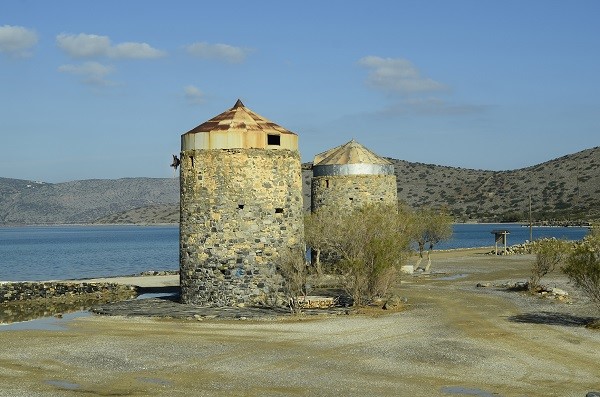 Only 4 kilometers from Elounda to the north, opposite the village of Plaka, is the tiny island of Spinalonga. This was the last standing leper colony in Europe and closed its doors not even 60 years ago.  The atmosphere at Spinaloga is extremely moving and it has its own rugged beauty. We suggest that you read up on the history before you visit as it will give you a much better insight to the way of life of the lepers who were destined to live there.  Life on Spinaloga was nicely depicted by the award winning author Victoria Hislop, in her novel ‘The Island’, which won her the British award of best first debuted author in 2007. Her book was also made in to a TV series for Greek TV.  Regular boats to Spinalonga leave from Plaka, Elounda, and Agios Nikolaos.

We feel that Crete will capture your heart as it has done with so many visitors who return time and time again. Every visit brings something new to discover and explore.  Crete in a nutshell!  Can you think of a reason not to visit this wonderful island?