The first thing that I want to tell you is that breastfeeding gets better as you go. I promise. This is coming from someone who had an undersupply and also nursed through Thrush for a month. After giving birth and having kidney stones while I was pregnant, nothing hurt worse than nursing with Thrush. Breastfeeding is challenging to say the least–but if I can do it, you can too–if you want to.

There are so many things I learned along the way while breastfeeding that I kept asking myself, why didn’t anyone tell me this?! The sad reality is that the hospitals and your doctors know shockingly little about nursing. I called my doctor’s office the first week after I had my baby because our baby nurse kept saying that “my milk didn’t arrive yet.” I was desperate for advice on how to bring this mythical beverage in quicker so that my poor daughter could eat. I was immediately rebuffed by the nursing staff and told to call a lactation consultant. I’m not sure about where you live but in New York City, a two hour session with one of these experts who will come to your home start at $250. You will probably end up completely confused if you’re anything like me and the rest of mother kind. In the hospital they tell you that you shouldn’t use your pump for two weeks and that you can’t supplement milk at the beginning or your body won’t learn to produce enough. Fast forward once you get home and the baby nurses tell you that you have to supplement because your baby is starving and that you should start pumping ASAP. At this point you’ve probably been up for at least 36 hours and when you think your poor darling is going hungry, you will just give them formula because the thought of this helpless baby going hungry will nearly destroy you.

What I learned, however, is that even if you (and your baby nurse) don’t see the milk from pumping, there is most likely enough milk there. Pumping is nowhere near as effective as your baby nursing so while you may just have a tiny bit after a pumping session, your baby is likely getting all she needs (which at the beginning is just a thimble full).

The reason I had an undersupply is probably because we kept bottle feeding my little one and I didn’t have her on my breast, which is what tells your body to bring in the milk. It became a sort of chicken/egg situation. Do I not have supply because I’m supplementing or am I supplementing because I don’t have supply? Baby nurses may pressure you to bottle feed and the reality of it is, that’s fine too. I actually ended up being happy that we did both because my daughter can take a bottle and breast now since she was used to it from the get go. But if you do want to exclusively breastfeed, you need to let your body learn that you need more milk and have her every three hours (or whatever your schedule is) on your breast. I finally decided to go to a breastfeeding support group and it was the most helpful thing. Ever. The first thing I learned was that breastfeeding groups are much less expensive than hiring a private consultant. The thought of nursing in a group sounded like a nightmare to me. However, after reaching a low point, I cracked and went. All I can say is I wish I went right at the beginning. I can’t emphasize enough how helpful it was. There is a scale at most of these groups so they can measure exactly how much your nursing baby is ingesting. This can help alleviate a lot of the stress of wondering if you are feeding your baby enough since unlike with a bottle, you have no idea what they’re getting. The lactation consultant can also help you with latch and position (all of these things seem impossible at the beginning). The cost for one of these groups usually ranges from $25-$50 per 1.5-2 hour session. Do this! Don’t suffer alone in your bedroom wondering how the hell to get this right.

If you don’t have access to a class like this, I watched a ton of YouTube videos to help with positioning. Just remember it shouldn’t hurt while you’re feeding (other than soreness), if it does take the baby off and reposition. When you do unlatch, remember to hook a finger in the baby’s mouth to break the seal with your breast to avoid injury.

I also learned that if you have an undersupply you can increase it. There are several things you can do. First, don’t bother with the Mother’s Milk tea, which you have to drink like ten cups of a day. Instead my lactation consultant told me that studies show that taking  an herbal supplement  by Motherlove is more effective because it is mixed with other herbs. It’s called More Milk Plus (alcohol free). Eating oatmeal can also help increase supply. There are also recipes online for like oatmeal bars. You can also do “power pumping.” The lactation consultant I used told me to choose the same time of day and four days in a row you pump 20 minutes on, 10 minutes rest, 10 minutes on, 10 minutes rest, and then another 10 minutes on. You can also rent a hospital grade pump, which can help extract more milk.

Also, don’t worry if your baby isn’t latching on perfectly. Mine never did, she just learned to readjust herself. The lactation consultant said “it’s not the best technique but it seems to be working.” And that was that. Good enough is good enough for me!

Next, get the My Brest Friend Pillow. Don’t bother with anything else. This is the best. You need the strap to hold the pillow close to you. End of story. I tried the Boppy and Bebe Au Lait and there was no comparison.

I also learned that you should massage your entire breasts hard so that you get the hind milk stimulated since this has more fat and is more caloric. You should also do this when pumping to get more milk out.

The upside of breastfeeding (immune support, etc.) is what keeps us mommies going but the downside is the breast pain and numerous complications that can arise. What I learned is that saline soaks are better than ointment and butters for your breasts when you have cracks or soreness. The different creams and ointments help but they’re more to soothe than to heal. I think I tried a million different creams and when I had the worst cracks and none of them did anything. The best thing you can do then is just let them air out and do the saline soaks to promote healing. You can google a recipe to make homemade salt water or just buy it at the pharmacy.

In the same vein of keeping your breasts crack-free, change your breast pads often so your breasts are never sitting in wetness, which can breed infection and thrush.

At the beginning I also had a few clogged ducts–fun times. Since I had a baby nurse and a night nurse, I was sleeping through the night for at least 6 hours for the first few weeks. This is before your milk has adjusted to your schedule so I was getting very engorged overnight, which caused the clogs. When I spoke to the lactation consultant, she told me that you have to make sure you are emptying your breasts every three hours to avoid getting clogged ducts or mastitis. Whoops! Another mistake.

If you do get a clogged duct, then keep putting hot compresses on it and massaging it and trying to squeeze the clog out. Even better than a hot compress is to take a diaper and fill it with extremely hot water (I mean use your head, not water that would burn you). Diapers will not leak and will stay hot much longer than a warm washcloth. You can also stick them inside your bra. I learned this from Jane the Virgin. Which is not coincidentally the best show for new moms while breastfeeding. Hot showers are good also to unclog ducts and stimulate flow.

Pumping is an entire different animal. The first thing I recommend is getting an up-to-date pump because newer models are infinitely less intense on your breasts while still being effective. Check out my review of Medela’s Sonata and my review of Medela Freestyle Flex. It’s a huge upgrade from previous models. Also, avoid your pump parts irritating your breasts by wiping them with olive oil or coconut oil to reduce the friction. This really helped me when my breasts were at their worst. Also make sure that the pump parts fit you correctly to avoid unnecessary stress on your breasts. I would just take them to a lactation expert or even bring them to the hospital when you deliver and have them fit you because the instructions were difficult for me to understand.

Finally, breastfeeding shouldn’t hurt in between feedings. Don’t make the same mistake I did. You could have thrush. Symptoms include: flaky skin of the nipple/areola, peeling, burning pain on the nipple/areola, stabbing pain in both breasts in between feeding all the time. Even the loosest bra hurts. Make sure you get treated immediately. My doctor gave me Diflucan for 15 days. I have since been using APNO cream (which you need to get at a compounding pharmacy) whenever I feel any indication of those old symptoms.

If all this breastfeeding talk has made you want a drink, don’t fret, you CAN have one! I spoke with several doctors and read every study online that exists. Basically (and I’m no doctor so speak to your own) according to KellyMom (an extremely helpful breastfeeding website), if you are sober enough to drive, you are sober enough to breastfeed. So, I’m a huge fan of alcohol. I found not drinking during pregnancy to be torture. When the baby came out I was too terrified to even have one sip until about 8 weeks. Do whatever you’re comfortable with. But know that if you want a drink (one drink every two hours is what I was told) that you are allowed. That said, I know that breast milk is liquid gold, but if you want a night out drinking with your husband or friends, go for it and don’t feel badly dumping it. I’m currently almost at 4 months and I never would have made it this far if I didn’t take a few breaks here and there. Be kind to yourself. Breastfeeding and motherhood is hard. Oh and get yourself many bras and tank tops to make breastfeeding easier. My favorite brands are Bravado, Belabumbum, Bella Materna and Cake Maternity. My current superstar product is the Choice Camisole by Bella Materna. It’s honestly a game changer–especially for mobile and working moms who don’t want to be caught topless while pumping. You can keep your straps up and blazer on while pumping. It’s super comfortable, supportive and saves so much time because you avoid having to change from one bra into a pumping bra and back. Makes discreetly feeding your little one much easier. For more of my must haves check out my New Mom Must Haves article. 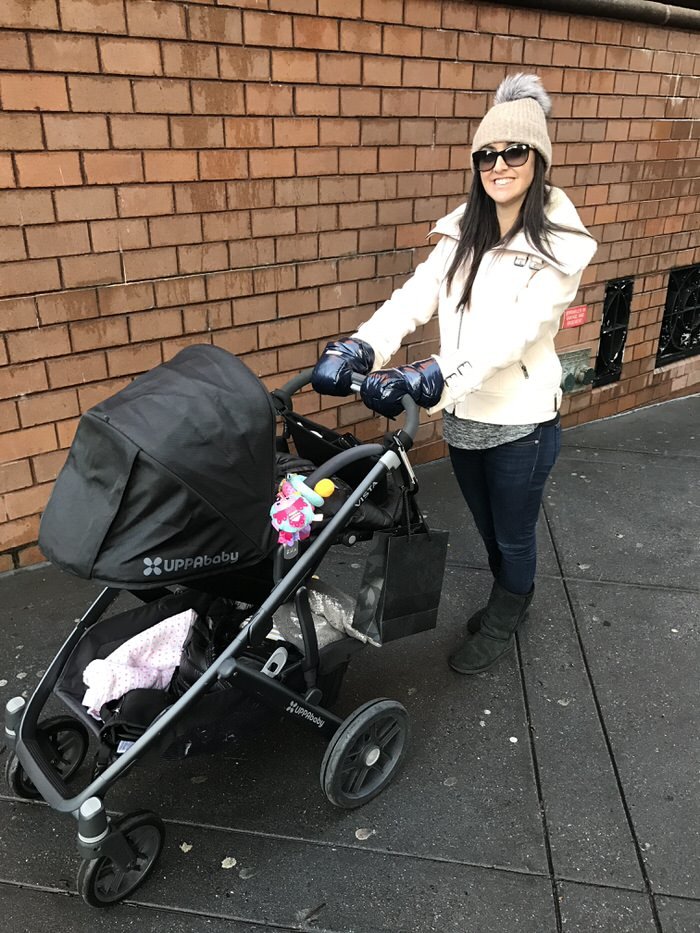 Best of luck! Whatever you decide, you are amazing and your baby is so lucky to have you! Oh and don’t forget to drink tons of water! They say 15 cups a day and they mean it. Otherwise you can get a whole host of other awful complications including really bad constipation and dry skin. So drink up!