Home > Travel Blogger Features > Travel Blogger Spotlight: 25 Things You Don’t Know About Noah Lederman
It’s been a while so it’s time again for your favorite feature, “25 Things You Don’t Know About” your favorite travel bloggers. This column is modeled after US Weekly’s famous section where celebs share fun, quirky and intimate details about their lives. I always find it to be a really fun and interesting column. And since many of you don’t know personal details about your favorite travel bloggers, it’s a fun way to learn! Up this week is Noah Lederman. My only travel blogging buddy who I was friends before we both started down this crazy road. Noah is the brains behind Somewhere or Bust.  He is an adventurous and interesting dude. He’s always down for a good time and to eat something that I cringe at the thought of. And I love him even though he still introduces me as “his friend’s wife,” despite knowing him for over a decade. Here are 25 Things You don’t know about him! . I was disqualified from a pie eating contest for smashing my face into the pie. The judges felt that I had caused too much of the pie to splash out.
. I worked as a surf instructor in Australia, California, and New York.
. I tried to teach myself the harmonica while I worked as an ocean lifeguard, but I had to give it up because I couldn’t hear the walkie talkie.
. I once won a really intense game of Musical Chairs in an Australian bar.
. Misadventures are my specialty. I’m so good at having travel pitfalls that I have a free ebook on my blog called Misadventures in Southeast Asia.
. I once sang 99 Bottles of Beer on the Wall and gave up when I reached three bottles.
. Before writing my travel blog, I spent many years writing about genocide. I’m working on a book about my grandparents’ lives in the concentration camps and my attempt to uncover their stories. And my novel features an infant survivor of the Cambodian genocide. I’m also working on an ebook about traveling through the sites of the Cambodian genocide. (I’m sure I have issues.)
. I was in a band when I was a pre-teen and many of our song ideas came from bumper stickers.
. Many of my favorite authors have the first name John or Jon.
. I went sky diving and bungee jumping in the same day. (I don’t like heights.) 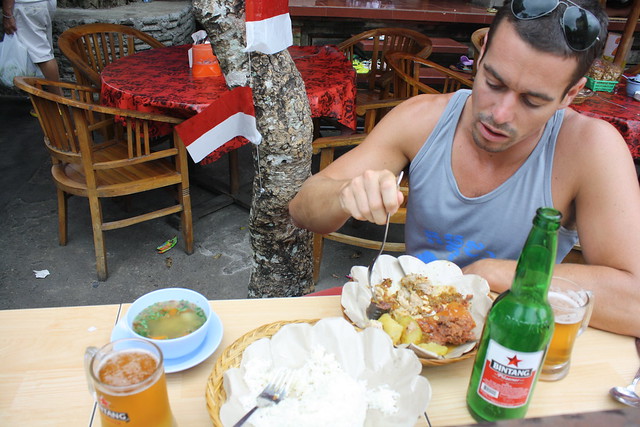 . I’ve eaten six varieties of insect, not including those that I’ve ingested in my sleep.
. I made the same dish for a month while I was down in Costa Rica: steamed rice with fresh tomato and avocado diced up, all of which was smothered in Lizano sauce. It was the start of my fifteen-month world tour and I was trying to save money.
. The only team sport I’ll play is volleyball. Otherwise, all of my sports are solo activities.
. I’ve taught nearly every core high school subject besides physics, chemistry, and trigonometry.
. While in Southern Portugal, I had to walk around with a branch because numerous stray dogs kept trying to attack me. I felt like Gandolf.
. I almost died in New Zealand 4 times. Once on a hike, once on a bike, and twice in the surf.
. I accidentally ran into one of my best friends in New Zealand.
. During one day in Australia, I ran into six people that I had known from the States. None of them were traveling together.
. I ran into my parents, brother, grandmother, aunt, and cousins, while we were traveling Israel. (They were separate from me.)
. The one dish that I make, which my wife likes best, is kale salad, which I learned from Traveling Panties after a dinner at her apartment. *******Yay*********
. I had a really easy time in college bumming rides to my restaurant job because all of the girls were scared to pump their own gas thanks to the DC Sniper. So in exchange for a ride, I risked my life and pumped their gas.
. Back in high school, I once drove out to the end of Long Island, stopping other cars to ostensibly ask for directions. Instead, however, I, along with some friends, sang the line from the then popular song “Who Let the Dogs Out?”
. I’ve had food poisoning in more countries than most people travel to in their lifetime. At last count it was 15.
. I surfed some of the world’s longest waves in Peru and Costa Rica.
. During my fifteen-month world tour, I was low on funds in Western Australia and enjoyed most of my meals from the free food shelf. My best dish was rice with rosemary.

Thanks to Noah for sharing all these fun facts. Keep up with Noah’s awesome adventures online:
Blog: Somewhere Or Bust. Ebook, Misadventures in Southeast Asia. Social: Twitter, Facebook, Instagram, and Google+.