Half the fun of visiting New York is eating your face off. And while there are literally hundreds of Five Star and Michelin-starred restaurants in New York, that’s not what most of the locals rave about–the heart of New York’s food scene lies outside its fancy restaurants (though of course we have the best in the world and I’ll do a post about those later). It’s easy to find the highest rated restaurants but it’s not as easy to know where to find the local hotspots that serve up the stuff that the real foodies eat every day. Today I’m going to give you a guide to the best and most quintessential New York City eating experiences–the stuff that is irresistible that will keep you coming back to New York City time and time again. And the best part is that most of these celebrated New York classics aren’t expensive at all. It’s these essential dishes that really give New York its reputation for its stellar, inventive and delicious food. The pizza, the bagels, the cronuts…let’s take a deep dive into New York’s finest foods that everyone should experience at least once! In no particular order…

New York style pizza just might be the most classic NYC food (apologies Italy but y’all just don’t do it like we do). You can grab a slice on almost any block and for $2 you can enjoy one of New York’s classic meals that its busy locals swear by. There are books dedicated to the best ‘za in New York City and wars have been fought over who serves up the best slice. A few of my favorite spots that have withstood the test of time in Manhattan are John’s on Bleeker Street, Rubirosa, Lombardi’s and even Patsy’s.

And even though I hate on Brooklyn, they do have some of the best pizza in the city, some of its top spots are Di Fara, Totonno’s (1524 Neptune Avenue (between West 15th Street and West 16th Street) in Coney Island in Brooklyn, New York) and Lucali (575 Henry St, Brooklyn, NY 11231). I think Grimaldi’s is overrated but go if you must just for the experience (there is also a Manhattan outpost now). And for a unique slice that’s highly regarded check out Artichoke Basille’s artichoke slice.

Zabar’s is an Upper West Side staple and a classic market worth checking out. It also serves some of the best lox on the planet. Ask for it thinly sliced, I promise you can thank me later! Russ and Daughters, Zuckers and Barney Greengrass also serve up pretty incredible lox as well.

Everyone has their favorite spots in NYC where to get their carbs fix. Some of the best are Murray’s Bagels, 72nd Street Bagels, and if you’re on the Upper East Side like me, check out Tal bagels, which I think is pretty darn good. Now let’s take a moment of silence for H&H bagels, which met its untimely demise in 2011…sigh…

Choosing the best burger in New York City is almost as difficult as choosing the best pizza place.  Probably the most universally regarded burger praised as being the best is the Black Label Burger at Minetta Tavern. But this one will costa ya $28! It’s pretty fancy and it’s also pretty difficult to snag a reservation. here Some more classic burgers can be found at J.G. Melon (1291 3rd Ave, New York, NY 10021), the Spotted Pig, P.J. Clarks, Burger Joint at Le Parker Meridien, and Corner Bistro. If you’re looking to go super casual you can’t miss a stop in at Shake Shack (go for the Shack Stack!). I LOVE it here.

Even though the cupcake craze is on the outs, if you haven’t been to Magnolia, Sugar Sweet Sunshine or Buttercup, you’re missing out. My personal favorite is a plain ole’ vanilla on vanilla action! Visit the Magnolia where they went on Sex and the City if you must (oh who am I kidding, I still love going. Haters gonna hate!) And if you want to try the West Coast chain Sprinkles, it’s pretty delicious as well.

There are no shortage of shrines to red meat in NYC. Peter Luger and Sparks are both old-school favorites. Del Frisco’s Double Eagle Steak House, Old Homestead, Keens and Strip House are all also incredible.

New York’s Chinatown is a great place to sample Dim Sum. It’s most popular for weekend brunches actually–a strange tradition I didn’t learn about until I moved here. Head down to Nom Wah Tea Parlor if you’re looking for a classic spot. It’s the oldest Dim Sum restaurant and has been open since 1920. Jin Fong and Dim Sum Go Go are also fabulous.

When you think of New York, street vendors probably come to mind but we’ve come a long way baby! While I wouldn’t be caught dead eating a dawg from a street cart there are some finer options to get your fix. Of course there is Gray’s Papaya or Papaya King, which are New York institutions at this point. But there are also new and original spots like Asia Dog and Crif Dog, which serve up inventive varieties like bacon-wrapped, Asian-inspired and even vegetarian wieners!

This little gem deserves its own category. Banana pudding with vanilla wafers at Magnolia is unbeatable. An oldie but goodie! This little pastry took New York and the world by storm. Often imitated but never replicated, be sure to sample cronuts from Dominique Ansel Bakery. There are plenty of imposters but they’re just not worth the calorie splurge. Decide for yourself whether they’re worth all the hype!

Serendipity is so classic NYC that it even has its own movie. Plan on waiting for a table for 2 hours but it’s worth it just to say you’ve tried this mouthwatering concoction.

While we’re on the subject of after-hours eating, I would be remiss if I didn’t mention Pommes Frites, the french fry window downtown. Grab a greasy cone of these suckers and pick your favorite dipping sauce. You’re welcome.

Whoever would have guessed that barbecue would be trendy? Not I! But if you’re looking for the best of the best you’ll have to hit up Dinosaur Bar-B-Que up in Harlem. The food is incredible and their sauces are to die for. Other heavyweight hitters in the BBQ market are Hill Country and Fette Sau (Brooklyn). And don’t forget about K-Town’s BBQ. Be sure to check out Shilla (37 W 32nd St, New York, NY 10001) if you’re looking to grill yourself some mouth-watering Bulgogi.

Get your pastrami on at Katz’s Delicatessen (home to Meg Ryan’s famous orgasm scene). Deli meat is something you must get when you’re in NYC and this is the best. 2nd Avenue Deli is also good if you’re in a pinch but nothing beats Katz’s environment. 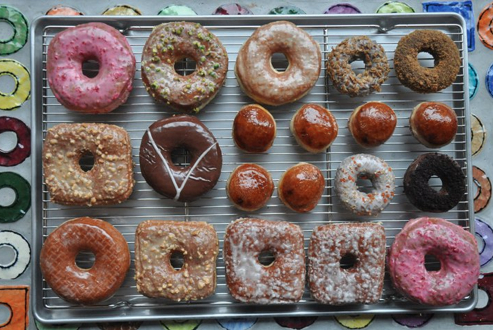 Image via Scissor and Spice

People that live outside of NYC don’t realize that donuts are so much better than the Dunkin variety. In fact, after you’ve tried some from the Doughnut Plant, you’ll think everything else tastes like trash. 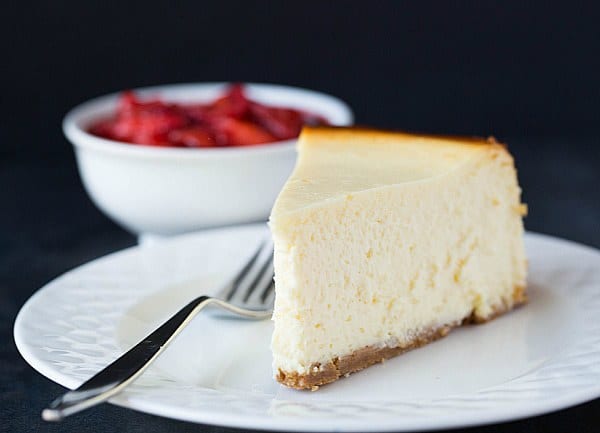 A must have while you’re in the city. Junior’s, Carnegie Deli and Two Little Red Hens serve up our favorites.

The only thing Manhattan has more of than pizza joints are Italian restaurants. The best of the best is Locanda Verde, Rosemary’s, Il Buco and Del Posto. Okay, so these are obviously a bit on the fancy side and I strayed from my own rule but I think I’ll forgive myself just this once. But for more traditional Italian I LOVE Carmine’s in Times Square–might be the ONLY thing I like about that place. 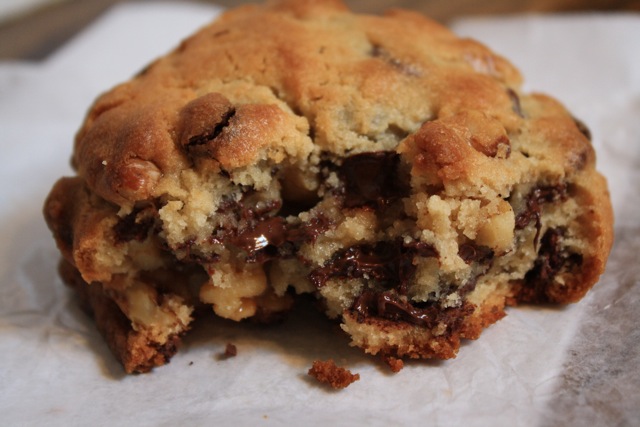 Levain Bakery serves up the best and biggest cookies in the city. They’re ooey gooey in the middle. Order whatever variety is fresh out of the oven when you go.

City Bakery is by far my favorite spot to get hot chocolate. It tastes like they literally just melted down the best chocolate bars in the world and then throw a homemade marshmallow on top. It will cost you–$5 to be exact for a small espresso-sized to-go cup, but it will be worth every penny of it. My other fave hot chocolate is Jaques Torres, if you like a little spice go for the Wicked variety. Runner up: Francois Payard Bakery.

I know NYC isn’t Paris, mmm-kay? But when Parisian pastry chefs want to open another outpost of their stores where do you think they head to first? If you want to try the best macarons check out Ladurée. Runners up: La Maison du Chocolat and Francois Payard Bakery. 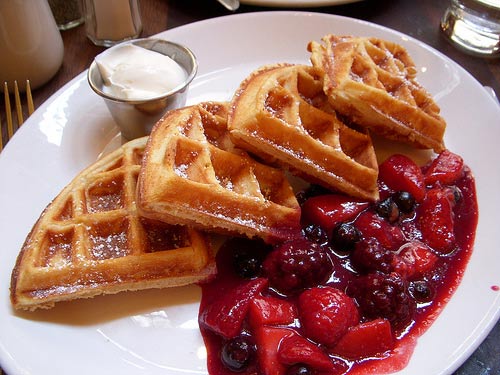 Brunch is an institution in New York City. Anyone who is anyone will be brunching on the weekends in their Sunday best with mimosa in hand. Balthazar, Barney Greengrass, Norma’s, Clinton Street Baking Co., are just a few of my favorites. My personal neighborhood fave on the UES is Parlor, which is a steakhouse but serves a fabulous brunch for great value (5 cocktails included!). Harlem’s Red Rooster consistently cleans up in this category. While of course it’s a bit gentrified and thus not the most authentic at this point (I mean come on, if Manhattan glitterati hang here it loses some of its street cred), it still serves up some incredible comfort and soul food.

Where are your favorites? What have I forgotten!? I am sure you have your own, let me know in the comments!

Do me a solid, if you’re planning a trip to New York or anywhere, use this link to Booking.com. I write all of this advice for free, it helps me out 🙂