Sex Tips for Straight Women from a Gay Man is based on the international best-selling book with the same title. The play features three-characters: an uptight straight woman, a seductive model, and the book’s witty author, a charming yet sassy gay man. They’re all at a pretend book lecture series and chaos ensues when the forward-thinking author tries to nudge the uptight department organizer to take a walk on the wild side.

I have to say, when I was invited to see this show to review it for my blog, I was tempted to turn it down. I thought, kill me now, it’s going to be a bridge-and-tunnel/bachelorette crowd near Times Square. But after a few minutes of reconsideration I thought hey, even if it’s terrible it’ll be a fun ‘Girl’s Night Out’ in New York City so what’s the worst that could happen?

So here is my review of Sex Tips for Straight Women from a Gay Man.

When we arrived at the theater and headed up 3 flights of stairs that resembled a condemned apartment building I had my doubts, but I must say–this jaded New Yorker ate her words and then some. If you come in with an open mind just looking to have some fun then you will. As long as you come with a gay man or another girl. I pitied the men who were dragged here by their wives or girlfriends. This is not, I repeat, NOT a very erotic play. It’s fun and funny. Don’t come here expecting serious, step by step advice–although there is a little. While the content though can be a little silly, the production was tight and professional–which I did not expect based on the theater’s amenities (ahem, the women’s bathroom leaves little to be desired). But I digress…

The cast was extremely talented and even two actual New York City residents (I took my sister) had fun. The show is more of a show rather than an actual practical guide to sex like its title may lead you to believe. I didn’t actually learn much from the show because that’s not really the point! (Either that or I’m just super knowledgeable on the topic LOL). I took it to be an energetic production with a plot and some hilarious audience participation. If you don’t want to be pulled up on stage, by the way–don’t sit in the front row. The audience all seemed to be having a blast, I didn’t see one person with a sour look on their face, though in full disclosure there definitely weren’t many people here who were from the city–which is fine, just saying.

The New York Times gave Sex Tips for Straight Women from a Gay Man a harsh review, arguing that the show didn’t live up to what it could have been. But in my opinion it wasn’t supposed to be an actual seminar, it’s an off-Broadway show. It doesn’t promise to deliver a to-do manual of tips–instead it’s a wacky and witty experience where you can buy miniature bottles of “American Champagne” (not a real thing, people!) and cans of Coors light and put them in your purse and bring them into the theater sans judgment. The music is fun and you’ll be dancing in your seat while you do a little bit of light learning.

You’ll laugh, you’ll smile, you probably won’t be totally shocked or offended no matter what your age. While the topic of course is sex, nothing said was over-the-top and there isn’t any actual nudity. You will witness blindfolded participants mimic hand jobs, inappropriately touch a roll of cookie dough and there are references to some ris·qué sex acts–but it’s New York City, I hear worse on my way to work on an average Tuesday.

There is a bar and it’s pretty cheap! You can get a decent full-size bottle of Prosecco for $50, most other drinks are about $8. The show says it lasts 80 minutes but at our show it was actually only 60 so plan accordingly, Bachelorette party limos!

I say yay to Sex Tips. We had a blast!

Sex Tips for Straight Women From a Gay Man is playing now at the 777 Theater on Friday and Saturday nights. 777 Eighth Avenue, @ 47th Street, Manhattan. To purchase tickets, call 866-811-4111 or visit sextipsplay.com 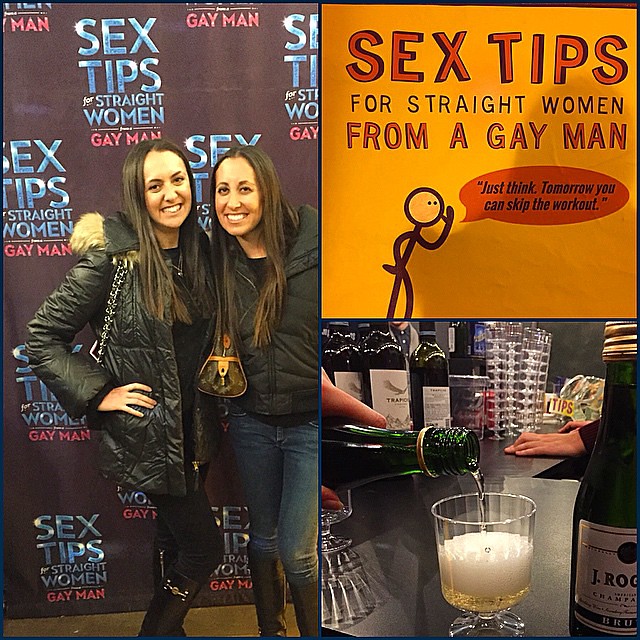 Don’t forget to check out our Guide to Eating in New York City, Tips for Visiting NYC During Christmas Season other great things to do in New York City around the holidays!

*PS, as I said above, I was given free tickets to check out the performance but as you can tell, opinions herein are always honest! Can’t buy the love here!